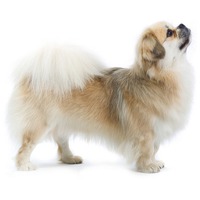 It is an ancient Tibetan breed. It was developed by crossbreeding the Lhasa Apso and the Pekingese which were given as a present to the Tibetan people by the Imperial Court of China. Old drawings and paintings depict this dog as raised in monasteries for religious purposes. It is believed that they were used to tow the "prayer wheels" on the surface of which were displayed the prayers recited by monks. In Buddhist monasteries it was also used as a companion dog and as a watchdog, barking from the top of the walls of the monastery. In Europe it arrived around the 1890s and in the U.S.A. in 1965.

It is a small-sized, sturdy dog, long rather than tall. The head is small compared to the body with a rounded skull and a small stop. The muzzle is small, straight and with a black nose. The eyes are medium-sized, egg-shaped, set apart and brown. The ears are medium-sized, drooping, at a slight distance from the head and covered with long hair that forms fringes. The tail is quite long and covered with rich hair, carried rolled over the back. The fur is double-layered, with a soft inner layer and a long, soft, silky outer layer. The abundant hair forms a mane on its shoulders and neck and rich fringes on the back of the legs and ears. The hair on the muzzle is short. The coat can have any colour or combination, but golden is the most common.

It is an intelligent, brave, proud, lively, quiet and watchful dog. It is affectionate, loyal and eager to please its master and loves children. It accepts other animals and other dogs if socialized with them from an early age.

This dog's fur should be brushed and combed regularly. The ears should be kept clean.

It is a dog which can adapt to any offered living conditions and its master's or family's lifestyle. It has a low level of activity and is happy with short walks, but it likes to run without a leash and to play.

It is an intelligent dog which wants to please its master. It easily understands what is required of it and therefore is easy to train. Because it is sometimes stubborn, the training must be consistent.

It is a good watchdog and a pleasant and devoted companion.