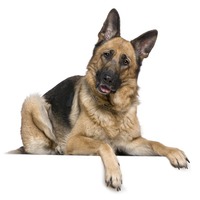 It is the best-known and most widespread breed in the world, being the national breed of Germany. Wrongly it has been given an Alsatian origin. It is a thousand year old breed that has a long line of ancestors starting with the Persian Sheepdog. Because of its vague similarity to the wolf it is also known as the wolf-dog. The breed was brought to its current form at the end of the 19th century by the cavalry captain - Maxx von Stepanitz through persistent and increasingly finer selections. The WUSV international organization has the headquarters in Germany and has over a half a million members from 60 countries which deal with the problems of this breed, the German Shepherd Dog being the only breed for which there is such an organization.

The German Shepherd Dog has an athletic, harmonious, a little over medium-sized body, which is slightly elongated and with the backline sloping towards the tail, seen in profile. It has a long, strong and brawny neck. The head is proportional and conical towards the nose. The forehead is slightly rounded, the muzzle is proportional to the skull and the nose is black. The eyes are medium-sized, almond-shaped, slightly slanting, darker than the coat and they have a lively, clever expression. The ears are proportional to the head, wider at the base, pointy at the tip and kept high (until it has 3-4 months it carries them drooping). The tail is bushy, long with thick hair, shaped like a sword slightly arched, carried low never on the back. There are 3 varieties: with short, rough and long hair. The last two are rarely seen. The most spread and loved is the one with short, thick, straight hair that is close to the body, shorter on the head and on the front side of the legs. The fur is double-layered, with a completely black outer layer or with a characteristic brown, red brown, yellow, metal grey or grey pattern. Even though it is robust it has an elegant, imposing and attractive look with a trotter walk covering a great area with every step it takes.

It is an active, lively, intelligent, watchful, and agile dog with a perfectly well-balanced psyche. Especially brave, firm, strong, resistant, it has a very good sense of smell and is always ready to fight. It easily adapts to every unpredicted situation because of its responsible and independent character. It is faithful, affectionate, and playful with its master and his family, it loves children and it gets along with them if it was socialized. Animals and people are treated with indifference as long as they don’t show signs of aggression.

Requires relatively little care, the brushing should be done especially during the shedding period with a special brush in order to remove dead hair.

It doesn’t require special living conditions, being resistant to bad weather. This breed is recommended to people who have enough time to reserve for the dog as well as for training and other physical activities. It needs socialization, training and exercise.

Because of its intelligence it is open to a more complex training. It is an easy dog to educate, to train because it likes to learn and understands quickly. The training must be done mainly by voice. The lack of socialization, exercise and training can transform this dog into a real pain for the master and for those around it. It loves its master very much and it’s ready to do anything for him with great pleasure and joy, because of a innate sense of duty.

In its home country, Germany, it is still used for guarding and working with herds and flocks. But it is also the best and most used dog for security and utility. Its phychological and physical qualities gave the possibility to use it in the most varied fields of activity: security, defense, guide dog for blind people, mountain rescue, intervention dog in case of natural cataclysms, fires, tracking down drugs.