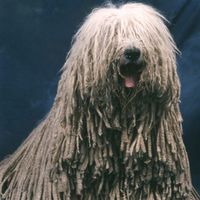 This breed descends from the Tibetan dogs brought to Hungary by the shepherds of the nomadic tribes in the 9th century. It is spread in several countries in Europe and in the United States where it is highly appreciated.

It is a large-sized dog, with a square-shaped, strong and brawny body. The head is big, proportional to the body. The eyes are almond-shaped, dark and covered with hair. The ears are large, covered with rich hair and drooping. The tail is long, slightly curled at the tip, kept low, and when the dog is alert, it raises its tail up to the backline. The fur is special, very thick and long, giving the dog a massive look. It is always white, double-layered, with a fluffy, very thick, wooly and waterproof inner layer. The  outer layer is long, curled and can be string-shaped.

It is an intelligent, watchful, very brave dog, attacking even bears and wolves. Its massive look awakens fear. It is calm, well-balanced and doesn't bark too much, attacking unexpectedly. It is extremely devoted to its master but it attacks strangers. It doesn't get along well with other animals from its territory. It gets along relatively well with children from the family.

The fur of this breed doesn't require any brushing, but the tufts of fluf must be plucked by hand to obtain a fringed coat. Baths are recommended only in summer because the fur takes several days  to dry.

Not too pretentious, it is resistant to bad weather. It needs a determined master that has experience in raising dogs. It needs space to move, socialization and training.

The training must be firm and consistent. It is slow to understand, but once it comprehends a command, it won't ever disobey it. It is not suitable for training activities or other sports.

It is an excellent watchdog for cattle herds and for houses.