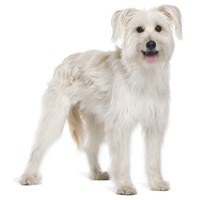 It is a very old French breed which supposedly descended from the Small Tibetan Terrier brought to the area by migratory peoples. Many believe that it grew together with the Pyrenean Mountain dog, which descends from the Tibetan Moloss dogs. It became known for its use by soldiers in the First World War. It was recognized in 1926. It’s spread in France and Italy.

It is a small to medium-sized dog, being the smallest of the French sheepdogs. It has a harmoniously built, rather robust and slender body with a flat, triangular shaped head. (It resembles the head of a brown bear). The muzzle is trapezoidal and has a black nose. The eyes are big, brown or blue. The ears are short, wider at the base, round-ended and erect. There are two varieties: the first has short, less thick hair and grown the wrong way, with a medium-sized fringed tail, that forms a hook at the extremity, the colour of the fur can be reddish with black, grey with white patches or harlequin; the second variety has the head covered with short, smooth hair (it’s also called “shaved face”) and the rest of the body is covered with 4-5 cm long hair, longer on the neck and back with fringes on the legs. The tail is long and bent at the tip and it can be docked. The colours of the fur include: all shades of black and harlequin.

It is an intelligent, active, dynamic, watchful, fast, attentive dog and always on guard. It is attached and faithful to its master and his family including the children that it accepts. It is suspicious and skeptical with strangers. If it socialized from an early age, it will get along well with other dogs and other animals.

This dog doesn’t require too much care. A weekly brushing should do the trick. Excess hair from the ears must be removed.

This dog is resistant to bad weather, it likes outdoor life with an active master that has experience in raising dogs. It needs organized activity, socialization and training.

It is an easy dog to train, it needs a consistent training without being too harsh. They can be trained to save people, being able to cope with this activity. They like activities like flyball or agility contests.

It is a very good watchdog for herds and houses and a good companion dog. It can be used, if it was trained for that, in mountain rescue operations.