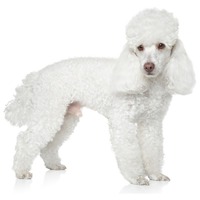 These two varieties were developed from the Standard Poodle through attentive and severe selections during the reign of King Louis XVI of France. The fame of these dogs grew at all the royal courts and noble families. In the 19th century, these dogs were also used by the circus, impressing spectators with their agility. Except for the size, all three varieties (miniature or toy, standard and giant) are identical.

It is a small-sized dog, with a square look. The skull is the same length as the muzzle, well-shaped, with a moderate stop. It has a fine, flat muzzle and a black or dark red nose. The eyes are egg-shaped, set-apart and dark. The ears are pretty long, broad at the base, round-ended, drooping and covered with long, rich and wavy hair. The tail is set high, conical, it can be docked and kept high. The hair can be curly or cord type. The first variety has rich, soft, woolly, curly and elastic hair, forming equal curls. The cord-hair variety (less frequent) has fine, wooly, cord-like hair, forming characteristic equal fringes, of minimum 20 cm. The longer they are, the more appreciated. It can be: white, black, brown, gray, apricot-coloured.

It is an intelligent, jolly, playful, sensitive, eager to learn dog. It is very attached and devoted to its master, it gets along well with children and announces strangers. It accepts other dogs and other animals, especially if it was socialized from an early age.

The fur of this companion dog must be trimmed carefully by a specialist, leaving long hair on the head, ears and legs. This dog doesn't shed. They will be washed regularly and the ears will be kept clean, not to get infected. The fur of the exhibition dog requires a much more careful and expensive grooming. It can have a traditional haircut, more than 50 variants. Although it has a decorative aspect, this derives from the utilitarian function of the fur, which is trimmed in such way to help it swim easier and faster and to protect it against the cold. The two hair tufts on the back help  prevent rheumatism and the tuft on the tip of the tail helps locating the dog under water.

It feels best in a flat, with an attentive and loving master. Even if they have a medium level of activity, they must be taken out for daily walks. It needs socialization and training.

It is a smart and eager to learn dog. With a gentle, but consistent training, it will learn fast what is required of it.

It is a devoted and wanted companion dog.